Printed Fresnel Optics (or: Fresnel lenses) consist of a series of rotational or non-rotationally symmetric grooves printed in an UV-curable optically clear resin. The thin, lightweight construction, availability in small as well as large formats, and excellent light-gathering abilities make Fresnel Optics the preferred solution in a large variety of applications.

A Fresnel optic replaces the curved surface of a thicker conventional optical Convex lenses or Concave lenses with a series of concentric grooves. These contours act as individual refracting surfaces, bending parallel light rays to a common focal length, or the opposite direction. The driving principle behind the conception of a Fresnel optic is that the direction of propagation of light does not change within a medium (unless the light is scattered). Instead, light rays only deviate at the surfaces of a medium.

However, it is important and fair to note that when high precision imaging optics are  required, conventional singlet, doublet, or aspheric lenses are still best performing.

The first Fresnel optics ever were made by grinding and polishing glass by hand. Eventually, molten glass was poured into prefabricated molds, but it was only with the development of optical-quality plastics and injection-molding technology in the 20th-century that the use of Fresnel lenses became practical in many industrial and commercial applications.

Today, printed optics have become a viable alternative to Fresnel Optics fabricated by traditional methods. On the contrary to conventional fabrication, 21st-century additive optics does not require a mold to pour the material into, nor require a certain base material from where the unneeded material is cast away.

Optical 3D printing starts with a liquid optical resin that is deposited in successive print head movements (not layers!) until the required shape is achieved, while it gets cured by UV-light. The resulting surfaces are optically functional and smooth straight from the 3D printer and do require zero post-processing.

One interesting development here is to name the arrival of Faceted Lens Technology, more specifically the Fresnel Sunflower Optic.

Fresnel optics structures can be manufactured on a variety of optical substrates. Commonly used for support are optical plastics, such as PMMA, but also Polycarbonates (PC) or even glass may suit for the job. The wavelength of operation and external conditions (impact resistance, heat development, etc.) may help to define the appropriate material of choice.

Generally, acrylic is the most common substrate and preferred material to work with, due to its high transmittance in the visible and ultraviolet (UV) regions, but polycarbonate and glass are the substrates of choice in harsh environments due to its resistance to impact and high temperature.

Printed Fresnel optics are most often used in light collecting applications, such as solar systems, condenser systems or emitter/detector setups. They can also be used as magnifiers or projection lenses in illumination systems, and for image formulation.

Generally, the fields of application can be categorized into three main areas: from light collimation and light collection to magnification. Here’s a small explanation for any of the respective area’s:

A Fresnel optic can easily collimate a point source by placing it one focal length away from the source. In a finite-conjugate system, the grooved side of the Fresnel lens should face the longer conjugate because this produces the best performance. 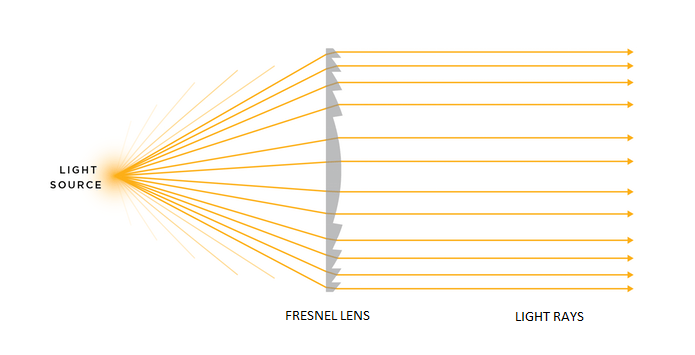 Figure 3: A wide variety of light rays from a given source collected by a Fresnel Optic.

An optical system in which the goal is to converge light from a relatively large regional area to a significantly smaller aperture can be labeled as a ‘condenser’ or ‘concentrator’ lens. For a concentrator system, a Fresnel optics design will be thinner and lighter weight than an equivalent continuous surface optic.

The gain is most evident at especially large area applications (200 × 200mm2 or larger for example) in which solid core continuous refractive lenses will become very heavy and unwieldy indeed. The Luximprint 3D Printing platform is well suited for that, as it can easily handle large-format optics.

One of the most common applications for a Fresnel optic is the collection of solar light, which is considered very nearly parallel. Using a Fresnel optic for light collection is ideal for concentrating light onto a photovoltaic cell or to heat a surface. In these cases, the overall surface area of the lens determines the amount of collected light.

The simplest way to think of a solar Fresnel concentrator is to consider a lens with the focal point located right on the solar cell. When the lens is pointed directly at the sun, the light will be focused onto the cell with increased concentration thereby requiring less active cell area which can be an economical advantage.

Because the real task for maximizing solar radiation onto a cell for electrical conversion does not require minimizing the imaging aberrations, it is actually advantageous to design the Fresnel lens for maximum flux transfer without regard for imaging quality. A Fresnel lens design of this type is referred to as a ‘non-imaging’ lens.

Typical for solar fresnel lens concentrators is to orient the grooves towards the solar cell. This is opposite to the normal sense as described by the earlier collimator application in which the grooves face the long conjugate. With the grooves-in, there is the potential advantage of minimizing the impingement of solar radiation on the draft and also to avoid buildup of dirt and debris within the facets. 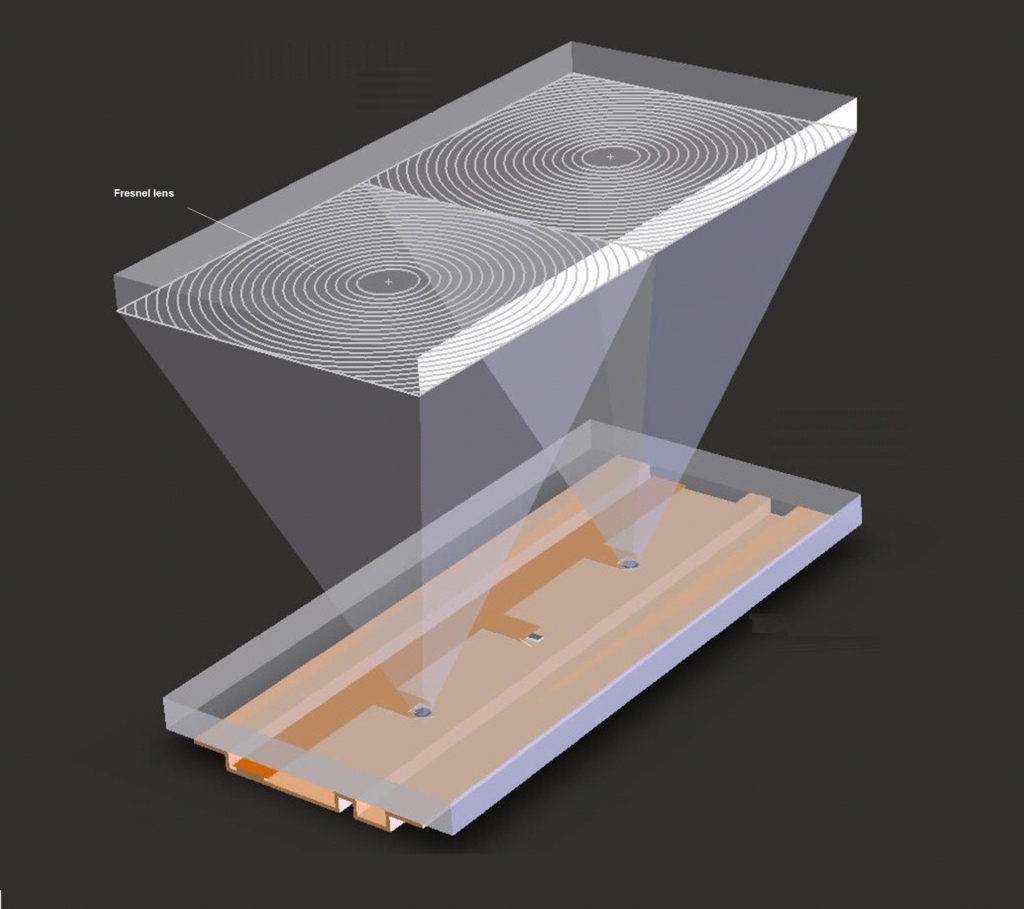 Another common application for a Fresnel optic is magnification. It can be used as a magnifier or projection lens; however, due to the high level of distortion, this is not recommended. Also, the image quality does not compare to that of a higher-precision system given the amount of distortion. At Luximprint, we mainly focus on providing solutions for the aforementioned areas.

Fresnel Optics are ideal for any application requiring inexpensive, thin, lightweight positive lens elements. Fresnel lenses are not a new technology, but their pervasiveness has increased with improvements in manufacturing techniques and materials.

The main benefits include:

# Light in Weight: compared to traditional glass lenses, or more ‘voluminous’ plastic lenses, the Fresnel Surfaces existing of some small concentric grooves saves a lot of material volume, thus reducing the overall weight of the part;

# Reduced in Size: compared to traditional lenses, the center thickness of a Fresnel Optic is lower thus saving space in assembly;

Fresnel Optics are truly unique optical lenses which make them a great tool for a range of interesting and fun optical designs!

If you are interested to learn more about Printed Fresnel Optics, and the capabilities offered by Luximprint related to your project, please don’t hesitate to contact us.