Concentrated photovoltaics (CPV) is a photovoltaic technology that generates electricity from sunlight. To incorporate CPV on rooftops, the size of the panel has to decrease significantly. In order to enable CPV for rooftop purposes researches combined photovoltaic cells with a CPV lens array, created with additive optics fabrication technology to create a rooftop proof CPV system. It reduces not only the size and weight, but also the total costs of the CPV system.

Summary of the Project

In order to direct the sunlight on the CPV cells efficiently, researchers made use of two custom 3D printed lens arrays. One array was used as a refractive surface collimating the light, and the other was coated with a reflective coating reflecting the collimated light from the first lenslet array onto the microcells. Combining the refractive lenslet array with the concave mirror array at the bottom, the sunlight is focused efficiently. With this technique the sunlight is intensified 200 times, which makes this test setup highly efficient. (a) Schematic illustration of a microtracking microcell CPV panel. An array of microcell photovoltaics is transfer-printed on a central acrylic sheet that tracks by sliding laterally between stationary upper and lower acrylic lenslet arrays lubricated by index matching oil. (b) Simulated absolute optical efficiency of the array in a, defined as the fraction of incident optical power in the AM1.5D solar spectrum (λ<1.1 μm) delivered to the surface of the microcells. The microcell dimensions are 0.7 × 0.7 mm2, whereas the lattice constant of the lenslet array is ahex=12 mm, yielding a nominal geometric gain G=255. The maximum lateral translation required at 60° is ±5 mm and the total thickness of the panel is 9 mm. For reference, the simulated optical efficiency of a standard Fresnel lens operating at normal incidence with the same geometric gain is indicated by the red dashed line.

The Challenges of CPV

CPV systems operate most efficiently in concentrated sunlight, as long as the solar cell is kept cool through use of heat sinks. Diffuse light, which occurs in cloudy and overcast conditions, cannot be concentrated. To reach their maximum efficiency, concentrated photovoltaics systems must be located in areas that receive plentiful direct sunlight.

The design of photovoltaic concentrators introduces a very specific optical design problem, with features that makes it different from any other optical design. It has to be efficient, suitable for mass production, capable of high concentration, insensitive to manufacturing and mounting inaccuracies, and capable of providing uniform illumination of the cell. (a) Ray-tracing schematic of a singlet lens used for translation-based solar tracking, where defocusing at wide incidence angle because of Petzval curvature leads to poor performance. (b) Elimination of Petzval curvature through use of a folded optical path, where the focal plane lies in the middle of a dielectric with refractive upper and reflective lower surfaces. (c) Fraction of encircled optical power in the focal plane as a function of radius from the intensity maximum for the configuration shown in b. The top and bottom lenses consist of acrylic plastic and have a diameter of 12.7 mm; the simulation is conducted for wavelengths λ<1.1 μm using the AM1.5D intensity spectrum. (d) Annual range of solar incidence angles (relative to the surface normal) for a latitude-tilted panel over the course of a year in State College, PA, USA. The false colour overlay indicates the approximate direct solar irradiance falling on the panel surface accounting for cosine projection loss. The upper plot displays the calculated focal spot size for the configuration in c, defined as the spot radius encircling 95% of the focal plane optical power, versus time of day for the annual solstices and equinoxes.

The outcome of the research is not only that the panels could be produced smaller, and with less weight, making it suitable for rooftops, but because the panels can be placed with a very small distance between the next panel. Even outperforming fixed microtracking concentrating photovoltaic panels on efficiency per square meter.
X (a) Photographs showing the refractive top and reflective bottom 3D printed lens array together with the corresponding layout of GaAs microcells used to construct the concentrator prototype. These components were assembled as illustrated in the diagram to create the full concentrator stack shown in photographs of the outdoor testing configuration at bottom. The cells circled in red (top) were damaged during assembly and excluded (by shorting across them) from measurements; the total photocurrent is the sum of that collected from the bottom right cell and the series-connected middle row of three cells circled in green. (b) Ratio of the short-circuit current recorded from the concentrator stack under collimated Xe lamp illumination relative to that recorded for the bare microcell array outside the concentrator. The measured photocurrent gain is substantially lower than that predicted for this design via ray tracing simulation (solid black line) due to surface error in the printed lenslets. Qualitative agreement is obtained by incorporating Gaussian surface scatter and curvature error into the ray tracing simulation (red line) to model the impact of fabrication defects. (c) Short-circuit current recorded from the prototype array and from the bare reference under full day outdoor testing as shown in (a); the current enhancement ratio is indicated on the right-hand axis. 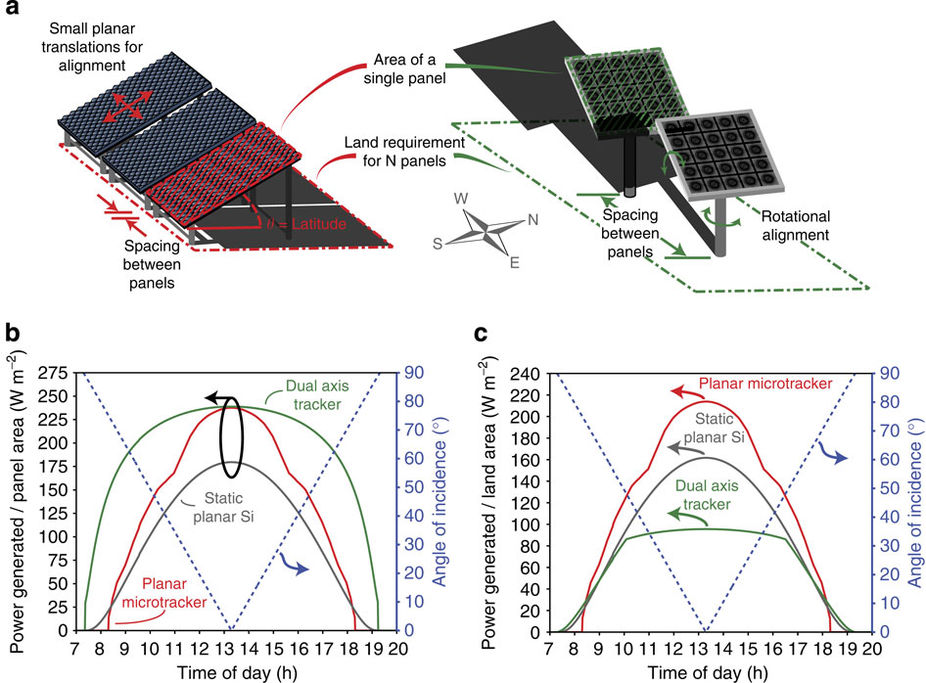 (a) Physical layout of an east–west oriented line of latitude-tilted microtracking panels spaced adjacent to one another. Dual axis tracking conventional Fresnel-based CPV panels shown for comparison must be spaced farther apart to avoid shading one another. (b) Simulated power generation per unit panel area for the microtracking and dual axis systems in (a) along with a latitude-tilted Si photovoltaic module for comparison (gray line). The spacing between dual axis panels is unconstrained and large enough to entirely avoid shading. The dashed line (right-hand axis) designates the solar incidence angle for the fixed-tilt microtracking panels. (c) Power generated per unit installed land area for each system; the dual axis panel spacing in this case is optimized to avoid shading for tilt angles up to 50°. As compared with b, in this case, the planar microtracking system generates nearly twice as much energy on aggregate as the dual axis system over a typical day since more microtracking panels can be located in a given land area without shading.

We selected printed optics because it is a true enabling technology that allowed us to rapidly and inexpensively prototype and test our concept. The main benefit of printed optics for CPV is rapid prototyping and testing of initial concepts”

Marco de Visser, Head of Sales: “We have enjoyed working together with Penn State, and have appreciated the contacts with Jared Price and Chris Giebink. They are very serious in their research, and we were happy to help secure the funding by stating that we would be a supplier on the project. We have learned from their research, and as a relatively new company we appreciated the chance to work together on this research project”.

The video below explains the main concepts of the research:

Luximprint believes research can improve our world, and with our rapid prototyping process for optics and manufacturing of small-/mid-size volumes we hope we can contribute to:

At Luximprint, we are always keen to learn about new research projects, hoping we can facilitate by delivering our printed optics within a very short timeframe, offering quick and affordable iterations, and in that way help improve design optimization. Research projects are always on a critical timeline and budgets are most of the time limited. For that purpose, we offer special work packages for universities and research institutes.

Pictures in this post are courtesy of Luximprint, Pennstate University and/or Nature Communications. Explanary text to images is quoted from the Nature Research document.